Let me say right at first that I did not write either of the two pieces that follow. I wish I had, because I love the sentiment behind them. But I will not take credit for someone else’s work.

The actual poem which inspired the story “The History of Grandma’s Apron” was written by Tina Trivett in August, 2007, as a tribute to her grandmother. It has appeared on numerous websites and blogs, and I am happy to re-post it as well, because it stirs up so many memories of my own grandparents. 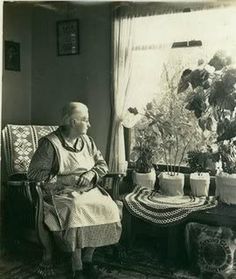 When I started thinking about it, until my grandmother came to live with my mom and me, I don’t really remember seeing her without an apron on. Her aprons were almost always made of some flowery material, and very soft, from years of washing. And they were one of those big ones described here in the stories, made for doing just about anything that needed done! As well as protecting her clothes, of course, because back then, our grandmothers NEVER wore anything but dresses! Dresses which had most likely been carefully made by them on one of those beautiful old treadle sewing machines. Most likely that’s why my mother was such an excellent seamstress, since she learned from her own mother. Why her two sisters never got that talent, I’ll never know; I guess they were never really interested enough to try!

Now, most of us who do cook, at least almost everyone I know, don’t wear an apron. I only have one in my house. It’s one that my mother made for my husband when we were first married, sort of as a joke, because he was always spilling food on his shirt or tie (and still does!) My mom wore them from time, to time, but sadly I don’t even have any of those.

But oh, how I wish I still had one of my grandmom’s aprons. To cherish, not to wear!

I don’t think our kids know what an apron is. The principle use of Grandma’s apron was to protect the dress underneath because she only had a few. It was also because it was easier to wash aprons than dresses and aprons used less material. But along with that, it served as a potholder for removing hot pans from the oven.

It was wonderful for drying children’s tears, and on occasion was even used for cleaning out dirty ears.

From the chicken coop, the apron was used for carrying eggs, fussy chicks, and sometimes half-hatched eggs to be finished in the warming oven.

When company came, those aprons were ideal hiding places for shy kids.

And when the weather was cold, Grandma wrapped it around her arms.

Those big old aprons wiped many a perspiring brow, bent over the hot wood stove. Chips and kindling wood were brought into the kitchen in that apron.

From the garden, it carried all sorts of vegetables. After the peas had been shelled, it carried out the hulls.

In the fall, the apron was used to bring in apples that had fallen from the trees.

When unexpected company drove up the road, it was surprising how much furniture that old apron could dust in a matter of seconds.

When dinner was ready, Grandma walked out onto the porch, waved her apron, and the men folk knew it was time to come in from the fields to dinner.

It will be a long time before someone invents something that will replace that ‘old-time apron’ that served so many purposes. 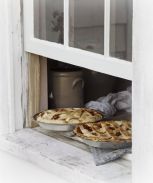 They would go crazy now trying to figure out how many germs were on that apron.

I don’t think I ever caught anything from an apron – but love!

The strings were tied, it was freshly washed, and maybe even pressed.
For Grandma, it was everyday to choose one when she dressed.
The simple apron that it was, you would never think about;
the things she used it for, that made it look worn out.

She may have used it to hold some wildflowers that she’d found.
Or to hide a crying child’s face when a stranger came around.
Imagine all the little tears that were wiped with just that cloth.
Or it became a potholder to serve some chicken broth.

She probably carried kindling to stoke the kitchen fire.
To hold a load of laundry, or to wipe the clothesline wire.
When canning all her vegetables, it was used to wipe her brow.
You never know, she might have used it to shoo flies from the cow.

She might have carried eggs in from the chicken coop outside.
Whatever chore she used it for, she did them all with pride.
When Grandma went to heaven, God said she now could rest.
I’m sure the apron that she chose, was her Sunday best.

Thank you Tina Trivett, for inspiring so many of us.