I remember the excitement and anticipation I felt when I was expecting our daughter. We were nervous, excited, scared to death, and thought the time to deliver her would never get here!

Like Ashley and Chris, we used the time to get our daughter’s room all ready, buy cute baby clothes, and stock up on diapers. We counted down the weeks. And worried and wondered if we’d be good parents. And every day the realization of our upcoming change in status from merely husband and wife to parents was very obvious to me, because I was carrying our daughter inside me. I felt her move, I heard her heartbeat, and saw her inside of me as the ultrasound technician moved her wand over my expanding belly.

Every day was a constant reminder of the new life that was coming. 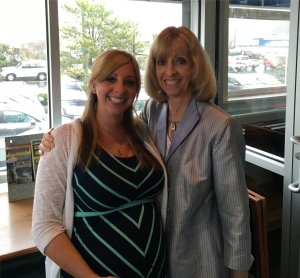 But being an expectant grandparent is different. Because I’m now going to be the mother of a mother of a child. It’s actually sort of hard for me to wrap my brain around that. My daughter, the little girl I carried inside of me for nine months, who I gave birth to, is now going through the same thing. And she is getting ready to give birth to her own daughter very soon.

And that has made me stop and reflect on what that actually means.

It sounds so different to say mother of a mother of a child. Even though that’s what a grandmother is, if you have a daughter. But that’s actually what I’m going to be. 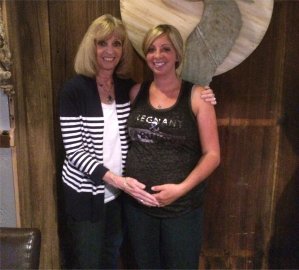 Because to me, her being a mother, her and her husband being totally responsible for a new life, means I have to look at my daughter in a new way. As an adult. And that’s something I’ve had a hard time dealing with. Not that she hasn’t been an adult for several years, but this is different. We’re entering a new stage in our mother-daughter relationship. It’s going to suddenly become more of an adult-adult relationship.

How’d she ever get old enough to be married, let alone have a child?

And now I’m becoming the mother of a mother of a child. How did I get old enough to graduate to that status? 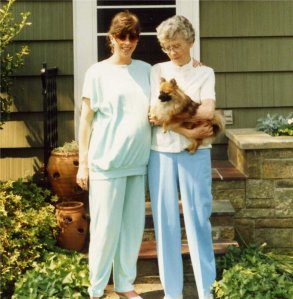 I’ve often wondered over the past few months if my own mother felt this way when I was expecting. Did she wonder where the years had gone? Did she have to reconcile in her own way that her only child had now totally passed over the threshold of childhood, never to return again? Because my mother’s only daughter (me!) was becoming a mother herself.

And now that mother of that child is becoming a grand mother…the mother to a mother of a child.

I don’t know if I’m ready for this or not, but I’m certainly going to do my best. I may make mistakes, and so might our daughter. We all do in this parenting/grandparenting game.

But in the end, being a mother to a child is one of the very best things a woman can be. And being the mother to a mother of a child is an honor that I cannot even begin to imagine.

The baton is being passed down our family line once again, and now it’s my turn to be the one ready to impart my wisdom and years of life experience, not only to my daughter, but eventually to my daughter’s daughter when she grows into a young woman.