A few days ago our son-in-law turned thirty. With all the jokes and comments about being old, and “almost over the hill”; “now you’re an old guy”….you know how it goes. Even the comment about, “at least he has a young wife!” Our daughter is turning twenty-eight, so she is younger than he is….

As the saying goes, you’re only as old as you feel. But hitting these milestone birthdays when you’re in that younger age group makes you view the aging process a bit differently.

I remember turning thirty. I had those same feelings. Suddenly I wasn’t a young twenty-something year old, trying to take on the world. Twenty felt really young. Thirty….well, that age sort of changed my thought processes a bit. For some reason I thought being in my thirties meant I had to act more dignified, more “mature”. I suddenly felt life was passing me by. And far too quickly. I had a lot of things I wanted to accomplish, and I suddenly felt rushed to do them all before it was too late.

How crazy is it that you can wake up one morning at the age of twenty-nine, feeling young and carefree, then wake up the next morning having turned thirty, and suddenly change your whole outlook on life? The day before you felt energetic and full of youth. Now, just one day later, that’s all changed.

But has it really?

Aren’t you still the same person you were the day before? With the same friends, the same hopes and dreams, the same ideas for your life? You look the same. Your hair didn’t turn gray overnight (and it won’t either – at least not at 30!). When you look in the mirror you look the same, don’t you?

Only your mind. You’re still who you were yesterday. You can’t let your age define you. In today’s society that’s sometimes easier said than done. Everything seems to be youth oriented, and we neglect to celebrate our own age milestones in the way we should.

Fortunately that’s slowly changing as those of us in the baby boomer generation move into our later years.

Age is just a number.

For me, turning forty was the hardest milestone. I have no idea why. At the time I had a beautiful two year old daughter, and a loving husband who took me out of town for the weekend to celebrate, and surprised me with a bouquet of forty balloons when we walked into the hotel room. Have you ever seen a bouquet of forty balloons??? It’s a lot! I do have a picture somewhere of me holding them, and I wasn’t smiling very big! Even though he’d already turned forty the previous month, and it didn’t bother him a bit, I suddenly felt older! Never mind that all our friends were in the same age group. I was focusing on me, like I was the only person who ever turned forty!

If I’d only known how to appreciate it like I do now. How silly that was!

My husband had a thing about turning fifty. He kept referring to it as being half a century old! By that time, I’d realized age in itself really didn’t matter so much. So it was time to help him embrace the aging process rather than dread it. 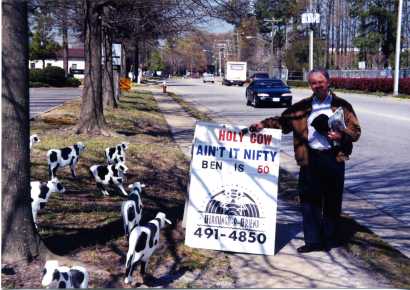 I woke him up at one minute after midnight to tell him “happy birthday” and remind him he was half a century old! Don’t think he appreciated the humor then, but as the day unfolded and he was greeted with fifty plastic cows in the yard, “over the hill” decorations all throughout his office, black and silver balloons everywhere, and plenty of “over the hill” gag gifts, he had no choice but to embrace his new status! And the book I’d written and surprised him with called “This Is Your Life, Ben” finally put it all in perspective, since I ended it with “the best is yet to come!”

He wasn’t looking forward to turning sixty either, but I made it another memorable occasion, with a pile of sixty gifts of “60’s”. You know, sixty 60-watt light bulbs for when he has a bright idea, sixty safety pins in case of emergency, sixty shirt buttons for when he loses one, etc. You get the idea. It’s actually hard to think of sixty different items, believe it or not, but I did! It took him two hours to open them, especially since I’d numbered them all and mixed them up, and he had to open them in order!

Turning fifty and then sixty didn’t bother me. Neither did sixty-five. Sixty-six sure does sound a bit older, but I’m still enjoying the process, not dreading it. Unlike my mother, I don’t mind people knowing my age.

How I’ll feel at seventy is hard to say, but I’m not thinking about it now. That’s four years from now. I have a lot to do between now and then.

The bottom line is this: age is a number, and aging is a process. As we age, we grow in maturity, and hopefully in wisdom. Milestones are just that; important times in our life that mark another stage in our development and should be recognized. But they shouldn’t be feared. Aging happens to all of us. It beats the alternative.

Enjoy your milestones, whether you’re at thirty, forty, fifty, sixty, or more. You’ve earned them. Just because you’re getting older doesn’t mean you have to act the stereotypical model of that age. I’m not, nor do I plan on doing it in the future.

You shouldn’t either! Go out and do something you’ve always dreamed about doing, just like I am! You’ll be amazed how good you’ll feel!