This was originally published in December, 2015, but I wanted to share it once again. Because the mystery of Santa Claus is still with us!

A big part of Christmas when I was growing up, like most of my friends in my hometown, was wondering what Santa Claus was going to bring us.

Sure, we all knew the real meaning of Christmas, because back then there were nativity scenes everywhere, not just at the churches, and no one complained at all. Almost of us went to church regularly with our families, and participated in Sunday School Christmas pageants as well, so we were quite familiar with the reason for the season.

But that didn’t stop us from believing in Santa Claus, and knowing that when we got up Christmas morning, he’d have been there and left presents for us under the tree! And we couldn’t wait to see what he’d brought!

I don’t remember the first time I saw Santa and told him what I wanted for Christmas, but I did find this photo several years ago, and that may well have been 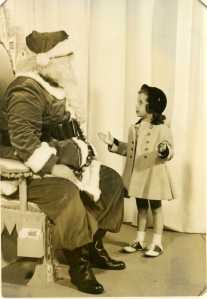 my first visit to see the man in the red suit. It was taken at Wanamaker’s Department Store in Philadelphia, most likely in 1954 or 1955. As you can see, I was all dressed up for this special visit, in a new hat and coat my mother had probably bought for me just for this important occasion! It wasn’t real commonplace back then to take pictures of kids with Santa Claus, so this picture is even more special, and the only one I’ve found of me with him.

And from the look on my face, I can’t tell if I was excited to give him my Christmas list, or just wondering who in the world this person in that furry red suit was, and why I was there!

Back in the 1950s Santa Claus was everywhere. We never questioned why. Because he was Santa, and he was, well, a bit magical. And we never questioned how he could be in two or even three places in town at one time; we never even thought about it. He just could. We never noticed that his beard didn’t look that real, and how it didn’t feel like our own hair, and how it didn’t even look like it was actually growing on his face.

Just like we never thought about how truly impossible it was for a sled to fly through the air pulled by reindeer, who certainly can’t fly, and even if they could, they could never pull a sled all across the world in just one night while their driver had them stop at each house, go down a chimney that he certainly wouldn’t fit in, and leave a bunch of toys under someone’s Christmas tree. All those toys would never even all fit in that sled! But we didn’t stop to think about any of that. 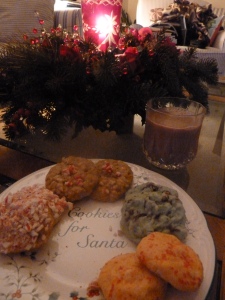 Of course we all left milk and cookies out for him. And we expectantly checked the next morning to see if they’d been eaten. Of course, all that was left were crumbs, and a few dregs of milk in the bottom of the glass. Reason tells us there’s no way someone can eat thousands of cookies and drink gallons and gallons of milk in one night and still function, let alone deliver toys! But that never occurred to us.

We never questioned. Because that was the mystery and the magic of Santa Claus. Eventually, though, we all figured out there wasn’t really a Santa Claus. Our parents had made it all up, just like their parents before us, and probably their parents’ parents as well. But it was a huge part of our Christmas tradition. And we never got upset that he didn’t really exist when our parents told us he did. We accepted it just as one of those rites of passage of childhood into adulthood. And we made sure we didn’t let on to our friends’ younger brothers and sisters and spoil it for them!

Today some of my friends don’t believe in telling their children about Santa Claus. They’re worried that if they tell them about Santa, when they discover later on it wasn’t true, they’re afraid they won’t believe other things they’ve told them. They don’t want them to miss the true meaning of Christmas. And that’s their choice; they have a right to believe that way if they wish. But personally, I can’t imagine not growing up without my dreams of Santa!

For all of us who grew up with him, the love and mystery of Santa Claus is always going to be alive and well in our hearts, whether we’re four years old, forty years old, or even eighty-four years old.

And do you know, to this day, I’ve never figured out where my mother hid those presents that were marked “From Santa”, and how she managed to get them all under the tree to surprise me without somehow waking me up!