Over the last several years I’ve made a lot of towel and diaper cakes for some very special recipients, including one of my daughter’s best friends whose wedding I planned and coordinated a few months ago.

But last week when I made one of my mini towel cakes with a beach wedding theme, complete with an “engagement ring” and a champagne cork couple designed after the recipients, it was the most special one I’ve done….because it was for our daughter Ashley and her now-fiance Chris! 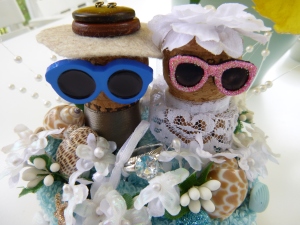 It was most definitely a labor of love, but I do have to admit I had a lot of conflicting emotions running through me as I designed and made this particular cake. Excitement, absolutely, because her dad and I knew he was going to propose, and we knew he was going to ask her on the beach during the fireworks! Ashley, on the other hand, had no idea, as it should have been!

His plans were all in place, and as Ben and I sat at a restaurant on the 4th of July waiting for her excited call, we were almost as excited as we knew she would be! And of course, their first engagement gift was to be that special creation I’d made just for them! I only hoped they liked it.

Of course, when Ashley called, I could barely understand a word she said, she was so very, very happy! It’s the moment all moms and dads think about as their daughters get to that certain age, and also wonder how they’ll feel. But I have to say, we were almost as excited as they were! And very proud to welcome our future son-in-law to our family.

So Ashley and Chris, this is for you. The first gift of many as you begin to plan for your big day, and for your new life together. Dad and I wish you two nothing but the best…..and now, my role as Mother of the Bride/Wedding Planner begins in full force! Sure hope Ben has his checkbook ready…… 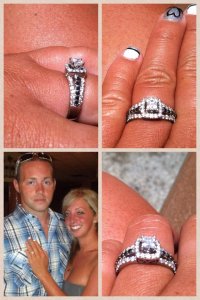 1 thought on “A Very Special Cake”